And exposing its obsession with women

I recently got access to DALL•E and have been having a blast with it. There’s been an explosion of information and guides on how to construct good prompts for it. In some instances it appears to be almost formulaic – this got me thinking – can I teach GPT-3 to come up with funky prompts?

I’ve got no idea how to construct good GPT-3 prompts, so if you want to skip to end, go ahead. Otherwise let’s just get into it and see what this gives us:

Complete nonsense, not even worth mentioning

I came across a website which specified a bunch of useful lists for creating DALL•E prompts. For example:

Let’s use them to create this instruction:

Kind of getting there, but it’s not very inventive. After about 10 more variations of the above, I couldn’t get GPT-3 to produce anything new; it kind of got stuck in a loop. Let’s try something more creative.

This is a painting of a young woman in a white dress. She is standing in a garden, surrounded by flowers. The light is shining on her from the left, and she is looking towards the right. The painting is in a realistic style, and the colors are very bright.

That’s more like it! Let’s give it to DALLE. (I will remove the “This is” portion of the prompt)

This painting depicts a beautiful summer day at the beach. The sun is shining and the waves are crashing onto the shore. The colors are very bright and vibrant. The subject is framed by the beach umbrellas and the palm trees. The medium is oil on canvas.

It completely forgot to specify the subject this time. I suppose there doesn’t have to be one. It also chose to use the same description for the colours/vibe.

In this painting, a young woman is standing in a sun-drenched field of wildflowers. She is wearing a flowing white dress and has a bright red scarf tied around her waist. The woman’s hair is blowing in the breeze and she has a serene look on her face. The painting has a warm, sunny feeling and the woman looks like she is in a state of bliss.

What’s with the women GPT-3? 🤨 I regenerated the output 3 more times and it was more or less the same thing.

The subject is a young woman, standing in a forest clearing. She is looking up at the sky, with a sad expression on her face. The atmosphere is one of melancholy and longing. The forest is dark and shadowy, and the sunlight is filtering through the trees. The woman is framed by the trees, and the light is shining on her face. This is a painting, done in oils.

Seriously? C’mon, I even maxed out the randomness to 1 (was 0.75)! To make a long story short, I tried a few more generations. I played around with the “presence penalty”, which affects the model’s likelihood of bringing up new topics. Nonetheless, it kept focusing on women or young girls as the subject, occasionally choosing a boy or “itself” (I) as the subject.

It is clearly struggling with the medium because it almost always chooses a painting and appears to defer the decision I am asking of it by simply stating:

This could be a painting, a photograph or a 3D render.

Let’s try to fix that.

It’s a photograph of a young woman, she’s sitting on a bench in a park and she’s looking at the camera with a smile. The light is soft and there’s a bit of a breeze.

It’s a 3d render of a cityscape at night. The streets are empty and there’s a light rain falling. The lights from the buildings and streetlights reflect off the wet pavement.

It’s a sketch of a man in a suit. He’s standing in an office with his hands in his pockets. The lighting is bright and there’s a window behind him.

This time it gave me 3 outputs for the price of one, presumably because of the substitution instruction, though it did skip the painting for some reason. We’ve kiiiiind of escaped the “woman loop”.

It’s a painting, in the impressionist style. The scene is of a park in the early morning, with the sun just starting to peek over the trees. The light is soft and diffused, and the colors are muted. The grass is still damp with dew, and there are a few people walking around, enjoying the peace and quiet of the morning.

It’s a beautiful sunny day and the sky is clear. The scene is of a young woman sitting on a bench in a park, reading a book. She’s surrounded by trees and flowers, and the sun is shining down on her.

You gotta be shitting me.

Let’s take some steps back. I’ll limit it to just photographs since I’m noticing that it’s forgetting to mention some of the specifics I am asking it for, which is odd because I’ve seen examples of extremely long and convoluted instructions that people have given it and it follows them to the dot.

In this photograph, the subject is a young woman standing in the middle of a road. She is looking to the left, away from the camera. The road is empty and there are trees on either side. The lighting is natural and the film type is color. The lens is a wide-angle lens.

A young man in his early twenties is leaning against a wall on a sunny day. He is wearing a worn leather jacket and jeans. His hair is messy and his eyes are looking down. The background is a busy street with people walking by. The light is bright and harsh.

Well, if it’s stupid and it works… You know, at this point it doesn’t feel like it’s headed in the right direction any more. Even if we escape the “woman loop”, we still aren’t producing enough creative variations. Let’s revisit what we tried in Attempt 3 but change up the description parameter.

A 3D Render of a small girl in the style of Banksy, from a Low Angle perspective. The girl is drawn in black and white with a few strategic color splashes. She’s standing in front of a dark background, with a single light source coming from the top left. The mood is playful and mischievous, with a hint of danger.

You know, that’s pretty good! Another one:

A Photograph of a Girl in a Blue Dress, In the Distance. The girl is standing in a field of tall grass with a light breeze blowing her dress around her. The sun is setting in the background, casting a golden glow on everything.

A painting of a sunset in the style of realism, wide angle. You can see the sun beginning to dip below the horizon, and the sky is a beautiful orange. The lighting is very warm, and the mood is peaceful.

A photograph of a rose in the style of Impressionism, 85Mm. The rose is in a garden with ivy crawling up a white picket fence in the background. The lighting is bright and the mood is cheerful.

Well, that’s not so bad. But it’s not great either. New generations are at least somewhat varied.

There are clearly issues with this approach. The last example specifies an impressionistic photograph; clearly some of the combinations of styles and formats just don’t make sense. I kind of hoped that GPT-3 would have a taller creative ceiling but perhaps it needs to be guided more. A lot of the generated prompts are pretty tame. I wanted lamas driving Ferraris in LA, not roses in gardens.

It’s now 00:30 and I don’t have the energy to create better prompts for my prompts, nor can I figure out GPT-3’s obsession with women.

And with my last few DALL•E credits, I leave you with… 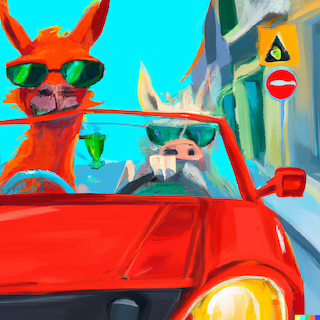 This took 5 attempts and I’m not even happy with it!