What I've learned about learning a language

Since the first time I started learning Spanish in school, 15 years ago, I have tried to rekindle the smouldered vestiges of vocabulary and grammar multiple times, failing to get any sort of fire going, like the pathetic metropolitan neanderthal that I am.

I am now on my 1000th attempt of trying to master Spanish and so far it’s proving to be my most dedicated run. It still has its ups and downs but I think I’ve learnt some things about learning.

When you first start learning a new language, you are likely to focus most on writing and reading. If I can’t even read or write yet, what’s the point of trying to listen and talk?

There’s some logic in there, but I think that kind of approach is flawed. I deferred speaking Spanish for a long time and I regret it. What I had failed to realise is that, much like in body building, targeting one muscle group and ignoring others is not really a good idea.

I am at a stage now where my reading and writing is miles ahead of my speech and listening skill. I assumed that if I grow a rich enough vocabulary and I can use it in writing, I will automatically be able to use it in speech. I mean, how hard could it be – I already know the words and grammar – I just need to speak it instead of writing it! To continue the body building analogy, I now have the the guns that make me feel confident, atop skinny legs that can’t take me anywhere.

Listening and speaking is just so different. It’s as if those neural connections move at a snail’s pace compared to the super neuron speedway of my reading and writing. I can almost feel my brain searching for the words that I’m hearing and I, as an outsider, am telling the little librarians in there that I know this entry exists, just hurry up and find it for me! 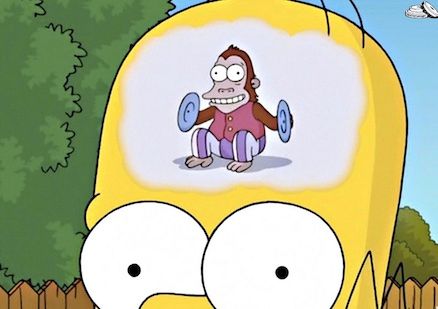 This is what I refer to as buffering. It’s awful and frustrating. It gets better, but only if you practice it. So don’t ignore speaking and listening early on; start earlier than you think you have to.

On top of that, learn from different resources; Duolingo will only take you so far. At the time of writing I am on Unit 78 out of 211, or just a mere 37% of the way through the entire Duolingo course. I’ve been at it for a number of years, starting, stopping, killing my 300-something day streak, restarting, and so on and so on. 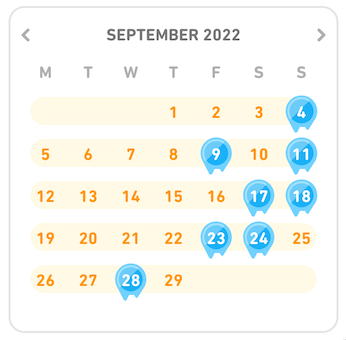 Last month’s “streak”. The blue dates indicate that I missed practice for that day but Duo saved my streak

Now, I really do recommend Duolingo, but I definitely find it a bit of a chore sometimes. Also it’s rather repetitive and just not all that exciting after a point. My biggest problem with it is what I mentioned earlier: you need to practice speaking and Duo only gives you a smidgen of speaking exercises and they don’t even emulate real conversation.

I’ve started paying for private lessons just so I can start speaking. Of course, you get the added benefit of having a 1-1 teacher who can teach you more grammar and throw different sets of exercises to you than what you’re used to with Duolingo.

And that’s the other thing: Duo gives you the impression that you’re acing certain topics but a lot of it is because you’ve subconsciously memorised the answers. That’s not a bad thing, but it gives you a false sense of your own ability.

Other apps I recommend (I am not affiliated with any of these):

Ultimately though, find someone you can practice speaking with after you’ve got some of the basics down, continue with Duolingo, and get a textbook. That’s what I’m doing now. We’ll see how it goes.